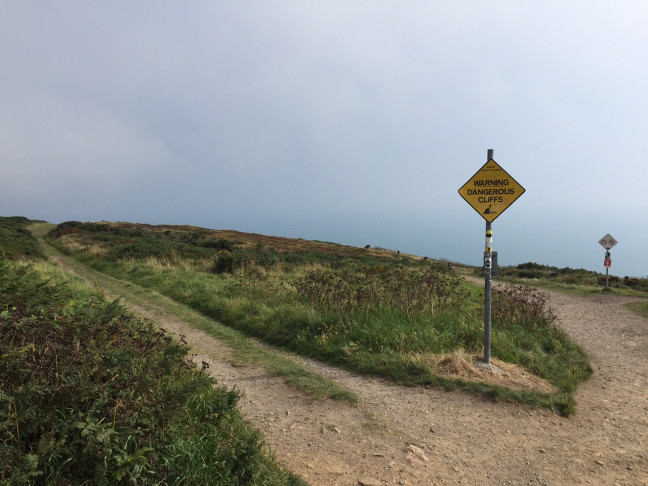 Howth is a small fishing village situated to the north of Dublin Bay. While the village and harbour area is bustling with activity - restaurants, shops, pubs - the peninsula also has some of the nicest walks in Ireland.

A favourite is the Cliff Walk from the village to the summit. It is best if you walk the old tramlines or get a bus to the summit and walk back down to the harbour via the cliffs. It's much easier than the other way around and the views are the same.

There are two walks down - the first is more gentle and further away from the cliffs although the views are still spectaular. On a clear day you can see south to the Wicklow mountains, north to the mountains of Mourne and sometimes east to Wales. This walk is suitable for smaller kids and decent buggies (the path is good and wide but stoney in places).

This walk ends near the village but the final part is on footpath by the main road.

The second option is the lower cliff walk and you should be prepared for difficult but manageable terrain and small climbs/steps.

This walk takes you right along the steep cliffs back to the village harbour area. The walk is safe but take the usual precautions and avoid windy days.

There are some nice walks in Howth to suit all abilities but if you like water and spectacular views then this is the one.

The blackberries are free and plentiful along the way in late summer/early autumn but reward yourself with some fresh fish in one of the local restaurants by the harbour before catching a DART back to the city.

Try the full Howth loop from the Dart station, up along the cliffs to the summit, down past the Baily lighthouse and Red Rock and back over the golf course, throught the Bog of Frogs and back down to the harbour via the old tramlines.

A-B. Starting from the DART Station follow the purple arrow onto the promenade along the harbour. You are also following green, blue and red arrows for other shorter loops. At the end of the prom, veer right onto Balscadden Road and ascend to reach Kilrock car park from where you join the well trodden cliff path.

B-C. Follow the cliff path for approximately 3km before the green, blue and red loops turn right and ascend to The Summit car park. You continue straight on here to reach the access road for the Bailey Lighthouse. Cross the road and join the second section of cliff path.

C-D. Continue to follow the cliff path for another 3km to pass safety handrails at Red Rock. Shortly afterwards, the loop swings right and uphill onto a grassy track. After 500m you cross the busy Carrickbrack Road and enter a hillside section.

D-E. The track takes you around the shoulder of Sheilmartin Hill to enter a golf course. Cross the course carefully - using the line of white rocks as your line of travel. On the opposite side enter the Bog of the Frogs area.

E-F. You now follow a track through the Bog of the Frogs and onto open hilltop on the shoulder of the Ben of Howth where you pick up the red loop before descending through the grounds of the local GAA Club, and eventually reaching the Balkill Park estate.

F-A. Entering Balkill Park, you pick up the green and blue loops as you join the tramline pathway. Follow the pathway downhill to exit directly opposite the DART Station - picking up the green, red and purple loops along the way.

Things to do near Howth Cliff Walk: 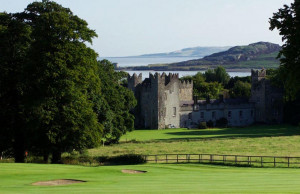 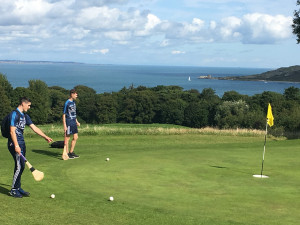 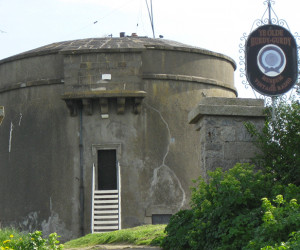 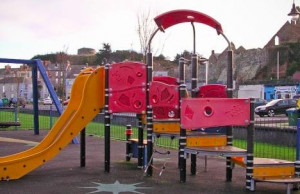 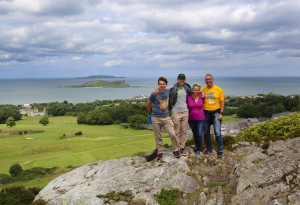 Things to do near Howth Cliff Walk: 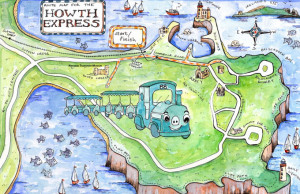